Which birds in the state of Maine have long beaks?

Have you seen a bird with a long bill in Maine, and want to find out what species it is?

Birds with a prominently long beak are usually specialist feeders. Their beak has evolved to access foods that would otherwise be difficult or impossible.

Mostly these are nectar eating birds, where the longer bill makes it possible to reach deep into flowers where other birds simply can not go.

Many waterbirds and waders also have incredibly long beaks that allow them to dig deep into soft ground to pull out prey such as worms.

So which bird species in Maine fit the description of having a long beak?

The Hummingbirds are the most obvious birds with a very long beak.

There are two species of Hummingbird seen in Maine: the Ruby-throated Hummingbird (Archilochus colubris) is by far the most common hummingbird in this part of the United States.

The Rufous Hummingbird (Selasphorus rufus) if often thought of as a western hummingbird species, but there are records as far back as 1957 of them in Maine and other eastern states. The Rufous Hummingbird is still very uncommon today in Maine, but it’s not completely impossible to have seen one if you’re lucky.

The Calliope Hummingbird has not been recorded in Maine since 2008. 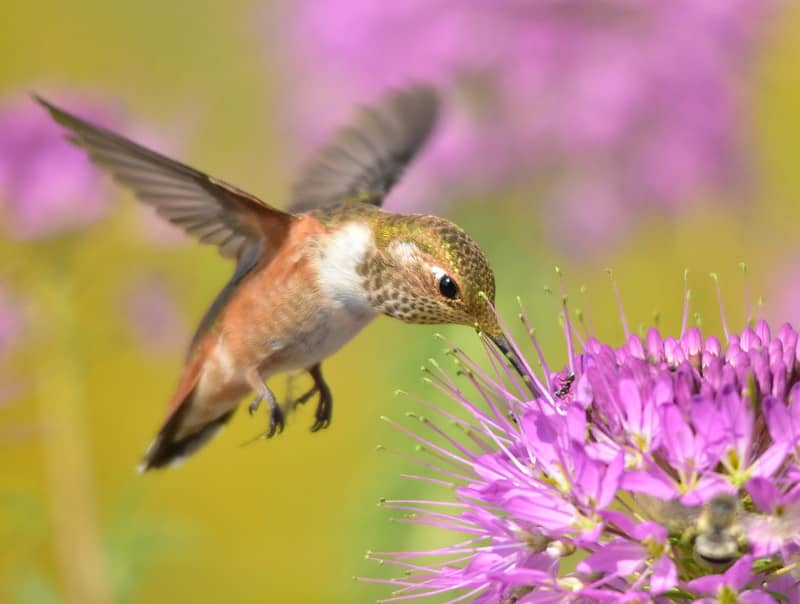 There are several migratory shorebirds often recorded in Maine which have very long beaks for digging into the ground for prey. These include several species of Godwit, the American Avocet, the Dunlin, and Dowitcher species.

The American Woodcock (Scolopax minor) is another Maine bird with a long beak. This bird is highly camouflaged and difficult to see. The Wilson’s Snipe is another very well camouflaged shorebird in Maine which is not easy to see.

Maine is home to two species of Ibis, a family of waterbirds with exceptionally long, curved bills. The White-faced Ibis and the Glossy Ibis are residents of Maine. However the White-faced Ibis is uncommon and only a few records exist in the south of the state. The Glossy Ibis is substantially more common and is found throughout most of Maine. If you’ve seen an Ibis in Maine (and they have a very long beak), it is almost certain to be a beautiful Glossy Ibis.

The Glossy Ibis and White-faced Ibis are also known to hybridize.

If you’ve seen a bird with a long beak in Maine and want to identify the species – first determine what habitat it was in. Was it a bird of the water or shore? Then you’ve most likely seen an Ibis, or perhaps a Godwit foraging along the shoreline.

If you’ve seen a passerine bird in your garden with a very long beak, it is likely to be a Hummingbird. In Maine, this is almost certain to be a Ruby-throated Hummingbird.

Where are Rufous Hummingbirds most common?

Where are the Hummingbirds on the East Coast?

Is the Rufous Hummingbird rare?