Bat Shelters and Bat Houses in Your Backyard

We’re not only about birds here at FeatheredFeeders. Any wildlife you’re lucky enough to have in your backyard or property should be protected and cherished.

Bats are fascinating animals and if you’re lucky enough to have them living near you, you can provide a home for them at little cost. Most people will not be aware that there are even bats living in the area. Obviously, they are small and they’re nocturnal. Unless you happen to have an encounter with bats near your home, they could very well be lurking around with you being totally oblivious to their presence!

This is also a great way to get kids interested in your local wildlife besides birds; especially as bats are generally animals that are rather cryptic and not often seen or noticed by anyone but the most curious naturalist.

Sure, bats won’t be as visible to you as the birds that come into your backyard. But you can feel good knowing that you’re doing your part to help conserve and protect these most important species.

If you’re going to install one or more bat shelters or houses (essentially wooden boxes similar to bird nest boxes), you will want to make sure it’s installed at a suitable and in a suitable location that will maximize the chances of bats finding it and taking up residence.

Box manufacturers will usually advise of the recommended minimum height to install your bat shelter, but regardless of which bat house you get you’ll want to place it at a minimum of 8ft high from the ground, but don’t hesitate to put it up at 12ft or even higher if you safely can.

The spot you choose for your bat house should be sheltered but still get exposed to direct sunlight if you live in a cold climate.

In most locations in North America, a south facing bat house is ideal. It will catch the sun, but if you put it in a location where there’s also some shelter, that will provide protection throughout the warmer months.

It’s understandable that new bat box owners will look to install it in a tall tree, perhaps within view of your house where you could get a view of the bats coming and going. But often trees are not the ideal place to put a bat box, rather they prefer a more open environment such as on a pole or on the side of your house if you’re comfortable with having the bats nearby.

What about the weather?

Most of us are living somewhere where there’s extreme weather at one or more times of the year. Whether it’s winter or summer or both, the big questions is can a bat house be used all throughout the year including in harsh weather conditions?

This is where the quality of your bat box is of paramount importance.

The best bat houses and shelters will be made to withstand just about any weather – from the coldest winters and snow, to rain, and very hot summers.

Obviously, your placement of the bat box can go a long way to supporting its usability by bats throughout the year, but a poorly built bat house or one made with less than ideal materials is just going to end up being a waste of time and money.

The last thing you want to be doing is having to replace your bat box every year because it’s been destroyed by the weather, or because the bats just won’t use it because of poor design or lack of comfort without suitable weatherproofing.

One of the most frequent misunderstandings that can lead to disappointment is the assumption that bats will move into your bat house right away!

This is very rarely the case. In fact, experts now know that it can take one to two YEARS for bats to find and move in to a new bat shelter or box. That means you need patience and importantly, not to assume that your bat box is a failure just because you’re not getting residents immediately.

People who are used to placing bird nest boxes and finding that birds visit quite quickly after installation of a new nest box or bird shelter can often assume the same must apply to bats. But bats and birds are entirely different animals with different behaviors, so it’s absoultely critical that you don’t give up after the first year or two of installing a new bat house. Just leave the box in place and as long as it’s been installed as recommended and there are bats in your area, it’s likely they will find it and use it.

A common question asked about bat boxes and bat houses is whether they could potentially attract other wildlife, like squirrels, and how this could impact on bats using the shelter. It’s unlikely that squirrels or birds are going to have an interest in a well made bat shelter because it’s not the right shape or size, and there’s no desirable feature that would attract other types of animals. Bat houses are made specifically for the needs of bats and these needs are rather different to the needs of squirrels and birds.

The main visitors of other types to look out for are in fact insects. Some people find that wasps come to check out the bat house.

There are now dozens of bat shelters, boxes and houses available to buy. One is the popular Audubon Bat Shelter. Bird watchers and backyard bird feeding enthusiasts will be well familiar with Audubon.

The Audubon Bat Shelter which is large enough to give shelter to 20 bats.

Not many products are hand crafted in the USA these days, but this bat shelter from Audubon is. So you know it’s not going to be a cheaply made, low quality construction with a short life. This thing is solid and clearly built to last.

It’s made of reforested red cedar and obviously has a very natural, appealing look to it. It is weather resistent and designed to last long term.

The inscribed Audubon logo and bat graphic is a nice touch. Seeing the shelter up close, you could imagine something handcrafted like this costing twice as much as it does.

You don’t have to assemble the house because it comes all ready to go. All you need to do is find a great location, then decide where you’re going to mount it to give your local bats the best chance of finding their new shelter.

Which bats will use this bat house?

Research has shown that many bat species will use bat shelter boxes like the Audubon Cedar shelter. The species you could get in your box will obviously depend on where you live. If you live in the range of any of these bat species then you’re in lucky: 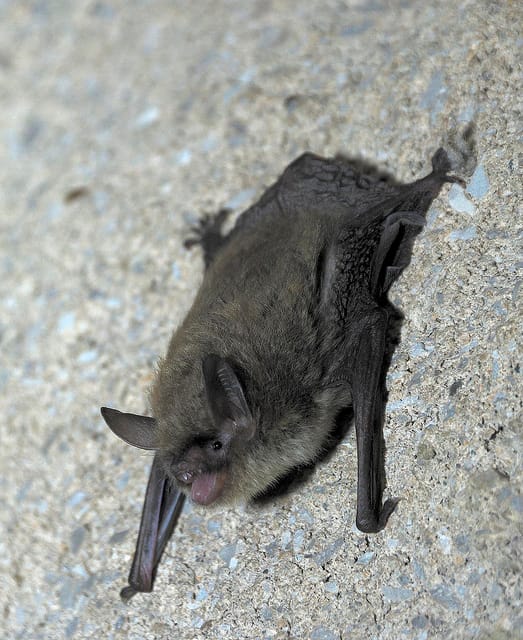 If you need something with a larger capacity, consider the Cedar Bat Chalet (25 bats) or Cedar Bat Cottage (up to 40 bats)

The landing area and interior of this bat shelter has been made grooved and rough so that bats can easily land and hold on when roosting.

It can be pole mounted if you want and the recommended mounting location for the shelter is between at least 10 feet up from the ground, ideally on a tree or on a high building such as a barn – natural locations where bats will go to find a roosting spot. Putting the bat box near water, such as a pond or stream, is ideal since bats are attracted to these water sources.

Bat Conservation International has a useful guide for installing bat houses on a building, which you can check out here.

There are holes already drilled in the box to make it easy to mount using these default holes, or you can take your own drill to it if you need a more custom solution; depending where you want to put the bat house. Also included are screws and a bracket ready for mounting on a pole, building or tree.

Benefits of having a bat shelter at home

How will you know if bats are starting to use the shelter?

In the early stages you might find it difficult to be sure that there are any bats making use of your bat house. But the subtle first signs of bat guano (droppings) underneath plus the more obvious (and beautiful) view of bats leaving the shelter at sunset will alert you to the fact that your bat shelter is being used and valued by the local bats.

Tips for using a bat shelter:

If you find that wasps or another swarming insect colony starts taking an interest in your bat shelter by starting to set up a nest, some people have shared their methods of warding off the insects including with a spray of water with a hose.

You’ll need to be vigilant though and deal with it in the beginning to avoid having to deal with angry stinging insects. Note that using any sort of chemicals to deter insects is definitely not recommended by us; for the sake of the bats, the insects themselves (who do have a right to live and find their own home somewhere), and for the environment at large.

We’d love to hear of any novel ideas people have of deterring or removing insects from bat houses, so share them in the comments below if you’ve experienced this!